By Alan Norris7 March 2014 No Comments

The Beachcombers are a group of voluntary coastal custodians dedicated to conserving Cunnigear Beach’s environment in Co Waterford.

They patrol the 2 mile peninsula daily and clear debris washed up from the tide and deposit litter at the 12 collection points along the beach.

The group was formed in January 2012 by Seamus and Maeve Phelan who became increasingly concerned at the effect of litter and its lengthy time to decompose, on their local waterways and its marine life. 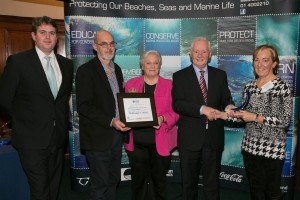 The Clean Coasts programme awarded The Beachcombers the CoastCare Merit Award 2013, highlighting their efforts and the work of a network of 380 volunteer Clean Coasts groups nationwide dedicated to cleaning and preserving their coastal environment.  The Clean Coasts programme is run by An Taisce, supporting community involvement working towards the protection and enhancement of Ireland’s coastline.  The programme promotes involvement of local communities in beach management and encouraging them to be guardians of their coastline.

The Beachcombers in 2014 will continue to raise awareness about the programme, erect signage to encourage the local community to participate in caring for the beaches and also liaise with the Environment Department of Waterford County Council.

Volumes of litter increase every year and impact on beach users.  Clean Coasts Week runs 9 – 18 May 2014 raising awareness on the movement for litter free seas and to encourage new volunteers to adopt a beach in their local area.

Easkey Britton is a professional surfer and ambassador for Clean Coasts.  Watch this video on her inspirational TED talk.